My favorite meal of the day is definitely breakfast. I love waking up and coffee in hand start frying bacon or put pancakes on the griddle. I can’t think of many things I love more than when mornings move slow and you can see the sun rising through the kitchen window.  I have shared a few breakfast recipes in the past on my blog, and I believe this recipe is the easiest one yet. Even if you can’t take the time to enjoy a slow morning, this recipe is quick! Not only that but it is so good. I love to make it alongside a breakfast casserole or just eat it alone. It smells amazing in the oven and I like to think it is even good for you!

I have to admit I’m not the biggest fan of regular oatmeal, but this is completely different! I promise you cannot go wrong with this yummy baked recipe.

Serve warm in a bowl! I love to add sliced fruit on top, such as strawberries and blueberries. To make it decadent, pour a little heavy cream or a splash of milk over it. This really softens up the oats and makes it oh-so yummy!

I make this oatmeal frequently at the ranch and love how hearty it is. You could easily make this over night and leave it in the fridge, so all you have to do in the morning is stick it in the oven.

Brady used to have the cutest little restaurant called The Patio. I went there all the time with my girl friends and every time ordered their quiche of the day. In fact, anytime I go to a restaurant that serves quiche I have a hard time ordering anything else- I just love it! It is one of those dishes that makes for the perfect brunch; you can either eat it with a cup of coffee or enjoy it as a lunch dish. For some reason I believed that quiche was difficult to make-and I was so wrong! This quiche recipe is so easy and so good!

I start with a Pillsbury pre-made pie crust. If you read my Lemon-Blueberry pie blog you know I’m a fan of pre-made! (If you have a great pie crust recipe, let me know!) Using pre-made is just so easy, and the Pillsbury brand is flaky after baked.

Preheat oven to 350 degrees. Unroll pie crust in a deep pie dish. In a small bowl, mix the five eggs, cream, salt and pepper then set aside. Spread the spinach on the bottom of the pie dish on the unrolled dough. Slice the tomatoes and layer them on top of the spinach. It should look like this!

Pour in the egg mixture and sprinkle cheese on top. Place in the oven for 40-45 minutes.

What I love so much about quiche is that you can add almost anything to it! Mushrooms, onions, chilies, cooked ham, bacon, etc. the list is endless! I will definitely be making quiche at the ranch this deer season. Let me know if you make this recipe and if you love it!

Last week was mom’s birthday she and dad went out of town to celebrate. I house sat for them and decided to make mom a grand birthday cake. I should start with saying that I watch way too much Food Network, thus making me believe I am just as good as any chef/baker out there. I wouldn’t last the first five minutes in Chopped, and I certainly do not have any cake recipe memorized. Anyhow, that was not going to stop me in making a show stopping cake!

So, like any person would do, I took to Pinterest to find the perfect cake. It didn’t take long and I clicked on a picture of what looked to be just the cake for the job! A White Chocolate Raspberry cake from ‘Mariah’s Pleasing Plates.’ She promised this was THE cake to end all cakes. I was sold. I made out a list of ingredients and headed to the store.

You can find Mariah’s original recipe here. She has pretty pictures of the cake that you most certainly will want to see to become a believer in this cake. I do not have said pictures because we ate it before any could be taken. That’s the truth.

I decided to make a four layer cake instead of just a two like she did, so I doubled up on the ingredients. *I would not suggest this. I wasn’t able to use the last layer because my cake just got too heavy and started sagging (where is Cake Boss when you need him?) I changed parts of the recipe too so you can choose to trust her or me on this cake recipe…I’m not the pro like Mariah probably is, but I’m guessing my cake is better.

(This part is confusing; don’t make the cake according to the box. It calls for 1 cup water, but instead use 1 cup buttermilk. I did add the vegetable oil and eggs like it calls for.)

Bet you didn’t think this would include a box cake mix! Just go with it.

Okay, that is quite a list. Don’t be intimidated though!

Add eggs, buttermilk, vanilla extract, and vegetable oil to the cake mix. Mix that in a bowl with a mixer on medium speed. In the meantime, take the chocolate bar and butter and melt it in the microwave. Fold it into your batter and mix well. Pour the batter evenly into the two cake pans and bake for 24-27 minutes. Allow them to cool for about 15 minutes after you take them out before taking the cakes out of the pans.

To make the frosting, again melt the white chocolate and set aside. Combine the powdered sugar, vanilla, whipping cream and softened butter. Blend until smooth. Now you can add the chocolate! If the buttercream is too thick just add more whipping cream. *I should also add that you can use 2% milk instead, but I ran out and used the whipping cream and it was delicious.

Now, place one layer of the cake on a cake stand. Add buttercream to the sides and over the top. Next, spread on a good amount of the raspberry jam! Top with the remaining cake round and ice it. I promise the jam is one of the best parts of this cake so don’t get greedy with it!

When I made this cake it did want to crumble on me towards the end. I’m not sure if it was due to the chocolate in it, taking it out of the cake rounds too early, or just user error. However, don’t let that stop you from making this! This cake could easily be a wedding cake. It is just that decadent. I wanted to keep this recipe to myself and WOW everyone with my fabulous cake but then decided something this great needed to be shared. Enjoy!

One of my favorite things is waking up and cooking a hearty breakfast. Whenever I was working I was always in a rush to get to school, so most morning I would have a granola bar or drive through. I always anticipated the weekend so I could make a big breakfast and have plenty of time to enjoy it! Now that I’m staying home I feel the need to make a good breakfast every morning. Cody always heads out early to work and I like to have something for him before he leaves (please note I said ‘like to’ not ‘I do’). While the typical breakfast is pancakes or waffles, I have a hard time making anything besides french toast. I’ve made it a lot over the past few years and I finally feel like I’ve perfected it. So here it is; I hope it inspires your morning and makes waking up a little more joyful.

*Please note the day I made this I used Vanilla Brioche bread. It was definitely yummy, but would work best for a bread pudding! For my perfect french toast stick to the French bread.

Crack one egg in a medium sized bowl and add the whipping cream, vanilla, and cinnamon. Whisk it until all combined. In the meantime, melt a tab of butter in a skillet.

Once your butter is melted, dredge the bread into the egg mixture. Place the bread in the skillet and turn after about 3 minutes on each side. I like my french toast to have a little bit of a crunch on the edges, rather than be soggy.

Once it is browned, plate it and top with syrup, powdered sugar and fresh strawberries.

Honestly, I could eat french toast every morning. Some weeks I do! Then I realize I ate the whole loaf of French bread myself and feel guilty. But, who can turn down such a pretty breakfast?

In the summer I love a refreshing dessert after a hot day. I came across this recipe on Pinterest, but tweaked it fit my busy schedule. Ok, I tweaked it to make it more simple. Maybe you’re into making your own graham cracker crust, but I’m into buying a pre-made one on the shelf. Alright, maybe I’m not the baker I wish I was or think I am. Anyhow, I shortened the recipe by not only buying a pre-made crust but buying a can of blueberry filling instead of  real berries. I’ll let you make your own decision here, but for this recipe I’m sticking to pre-made!

Here’s all you need!

With a mixer, beat the whipping cream until stiff peaks form. Then add softened cream cheese, sugar, and lemon juice. Here you can taste the filling to see if it is the right tartness for you. I personally love lemon so I wanted my pie to have a strong lemon taste.

After this, pour it in your pie crust and spread it out evenly. Because this filling took up the whole pre-made pie crust (probably the reason the original poster wanted you to make your own…) I decided to drop it in a large pie dish I had. I needed room for the blueberry filling without running off the top. Improvise, y’all!

After you spread the blueberry filling over the top, stick it in the fridge! I had mine in the fridge for about two hours before eating, and it was plenty cold enough. It was definitely a refreshing dessert and I highly recommend making it. The prep time was very fast; who doesn’t love a no-bake dessert?!

This dessert was easy, tasty, and pretty! Perfect if you are hosting friends over or needing to take a dish to a potluck. I think what would make this dessert more eye appealing would be to add lemon zest to the top (sadly I don’t have a grater, another kitchen fail). Also note that this pie can be runny, thus it is important to beat the whipping cream until it is stiff.

I hope you make this pie and love it. Please let me know if you do! 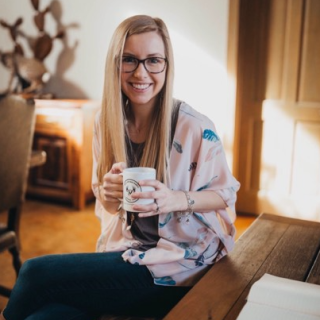